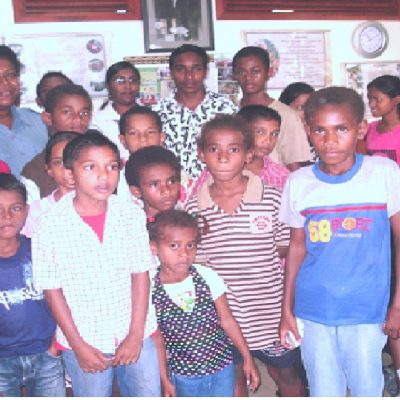 We were privileged to have Sergeant Arieta Namuaira of the Juvenile Policing Bureau to counsel the children, parents and guardians on truancy and the importance that our peers play in the upbringing of children and to be vigilant in their care during the first term school holidays.

A common observation is that the majority of adults present were female guardians or mothers mainly in part due to the fact that some fathers are non existent in the lives of their children – A sad reality.

New to the discussion was raising the awareness on the “Safety-Net Programme” recently introduced into schools by the Police and is an attempt providing greater protection of children.

A number of the older children had heard about this programme and it was interesting to witness their participation in questions asked by Sergeant Arieta. We were happy to note that they knew all the right answers and had been listening at their respective schools when the officers visited. Issues discussed were mostly about the rise in sexual offenses, glue sniffing, peer pressure etc.

Sergeant Arieta made it clear that quality time spent with the children did indeed reap benefits and constant interest in school activities and homework was a good holiday exercise for families.  Failure to participate in this aided in the decline of student performance.

The theory of “Monkey see Monkey do” was made only too clear in many cases, where the children learnt bad habits from adults namely their parents and/or guardians.

After hearing many stories we realized that the majority of students really don’t believe that the act of taking something without asking is in fact STEALING.

We try to make this clear to them in counseling but it’s going to take a lot more hard work. The attitude towards matters like these is too relaxed. Young ones been left unattended during school breaks was one of the major topics as it seemed like this was where trouble began to brew.

In all matters – one thing remains clear….Idle minds and Idle hands make for the Devils playground- which leaves one solution- we must get the children motivated in other areas such as gardening which is the best place to start….Being able to nurture something and watch it grow provides fulfillment.

All in all, it was an excellent day and we’re amazed at the rate at which children grow and we have faith that they will grow in wisdom also.