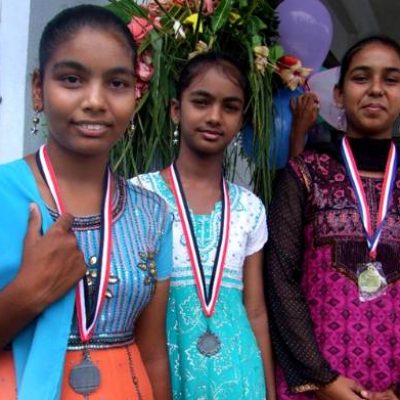 THREE sisters sponsored by Bayley Welfare brought joy to their mother after receiving their medals for scoring high marks in their respective classes.

Rukhshar Ali of Form Seven, Shafrina Ali of Class Seven and Shagufta Ali of Class Five of Basoga proudly received their medals at the awards ceremony at Bayley House yesterday.

They have been receiving educational assistance from Bayly Welfare Labasa since last year.

“I am happy with my three daughters’ academic performance ù they have done me proud,” Hasmul Nisha said.

“Their father passed away and we are surviving on social welfare assistance. There is no income-earner for the family.”

Bayly Welfare Labasa spokesman Satishwar Chand said the awards were to recognise the hard work and academic success of students supported by the organisation, which sponsors 125 students in and around Labasa.

“The children come from poor backgrounds and this is an effort to encourage them to work harder,” Mr Chand said.

Chief guest Helen Jaduram encouraged the students to study to achieve their dreams.